Our prayer lines are divided into Prayer Links. Prayer Links are a group of two or more members who join in prayer at agreed times and days during the week using their phones. Prayer lines start as early as 4:30 a.m. and as late as 8:00 p.m. Links pray one to three times daily and five to seven days weekly. For more information contact Gwendolyn Davis at (214) 357-3799. To view our monthly newsletter click here.
The Prayer: The drawing above was rendered by Dallas, Texas Artist, Gwen Pruitt Davis. It was designed from a photograph by famed Dallas photographer, Carl Sidle. 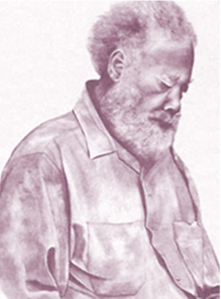 The Mission of Prayer Changes Things is to provide a fortress of prayer for all people and to be a channel of salvation and assistance to unbelievers.
History:
During the summer of 1979 two artists, Gwendolyn Pruitt and Linda Gamble Camp prepared to exhibit at the Bethlehem Center Foundation in Dallas, Texas. This would be Gwen's last exhibit before returning to Nassau, Bahamas where she was doing missionary work. Linda had met a new friend, LaBelle Jones. LaBelle was a friend of Birdie Strong, who was a missionary to Jamaica. The four women attended the exhibit where Gwen and Birdie met each other. The two missionaries knew that God had linked them together for a special purpose.
During the following weeks Gwen and Birdie shared their visions and would end their telephone conversations with prayer. Birdie agreed to accompany Gwen to Nassau and suggested that they pray daily for spiritual strength before departing Dallas. They prayed each morning. When Linda and LaBelle heard about their plans they joined the prayer sessions. God moved so mightily through the prayers that others heard and asked to join. The prayer line began to attract gifted, talented and educated men and women across the city. There was a rush of excitement to be a part of a new move that the Lord had orchestrated.
Prayer Changes Things

The Prayer by Gwen Pruitt Davis